I have come to regard memory – like my process of abstract painting – as never fixed, always in flux and infused by the multitude of present moments of recollection.

Memories – or the affective experiences that stimulate the memories – remain as invisible guides in my work, or perhaps are embodied within it.  Laying down images then intuitively erasing or overpainting to form new images suggests a link between creativity and memory itself.  Such a process of revising previous events, renders memory as active and always partially elusive.

A moment in time, gone now; all that is left is it’s affective impression. Early morning sunlight streaming through a window to mark the beginning of another glorious day in an otherwise, drab Welsh council house.  The sun’s brilliant light refracting through panes and its kaleidoscopic brilliance reflecting off everything within. A dazzling start to a new day. As ever,all seemed well with the world. Oh! that is rather a clichèd  phrase. Modern communications technology instantly and constantly  remind me that all is never well with the world.  Nevertheless my world remains full of such “stolen moments”.

Continuing as a development from earlier works, even so, I consider this painting to be an ‘Intuitive Abstraction’.  Obviously my mind must have been pre-programmed by what I had painted earlier, yet it was not a planned image. Not until a certain stage in the painting process did I decide on a final image, at which point, the ‘left side’ of my brain collaborates with its opposite,  working towards the final picture.  Then I have to decide what it  all means to me.  What it may convey to the viewer may be something completely different. To me, it is an intuitive response to what has gone before, touching on the complex process of memory and its affinity with abstract painting.   I am pleased with the result. 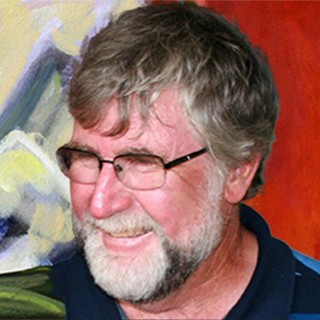 Born in 1947 in North Wales, David migrated to Australia in 1970 with his wife and children. He graduated from Southern Cross University, Lismore, NSW. with a Bachelors Degree of Visual Art (Honours). Davids artwork is inspired by memory; but rather than depict specific events, he reflects emotional situations, infused by present moments of recollection. In 2017 David was diagnosed with Parkinson's disease, which has profoundly effected his artwork. He uses colour, form and symbolic motifs, to create a personal visual story.